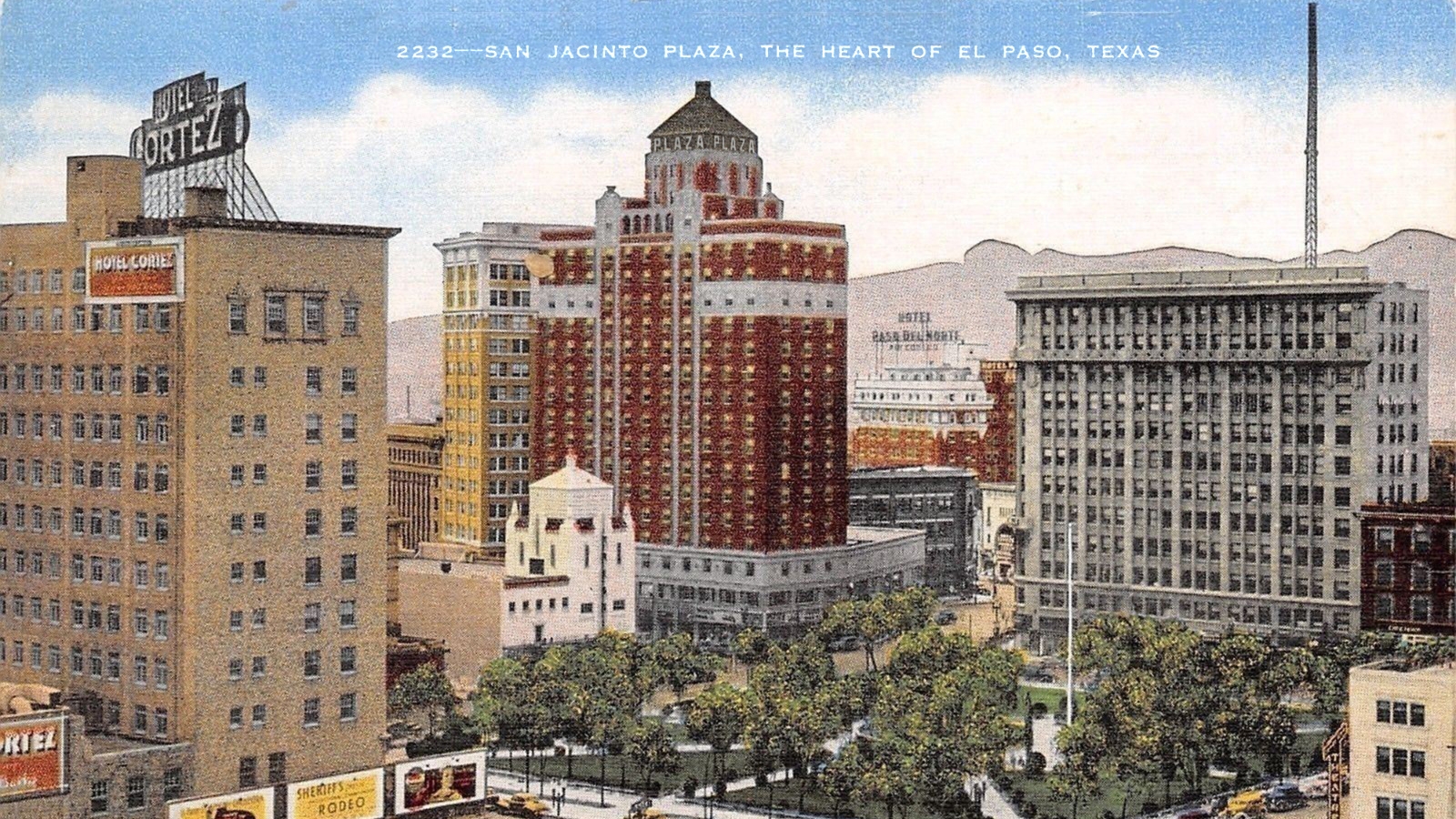 Completed in 1930, The Plaza Hotel Pioneer Park was one of Conrad Hilton's first hotels and a beacon of luxury in what was still a dusty West Texas town. By the early 2000s, the hotel had changed hands and sat vacant for many years. Since then, El Paso has been experiencing somewhat of a revival—in no small way aided by the passion and investment of philanthropist Paul L. Foster, who purchased The Plaza in 2008.

Over the course of nearly a decade, The Plaza has been meticulously restored to its original splendor.

An architectural marvel completed in 1930, The Plaza transformed the skyline of El Paso...

... becoming a beacon of luxury in what was still a dusty West Texas town.

To this day, it remains one of the shining emblems of Mayan Deco Revival—a decadent aesthetic mashup of Roaring Twenties glam and Indigenous iconography.

Being itself a work of art, the building became our inspiration in crafting the Plaza's brand identity.

We created a custom typeface from the channel letters of the historic sign—visible for miles, and so thoroughly tied to the building's identity.

This paired nicely with our graphic rendition of the soaring tower.

The building's facade also blessed us with some lovely Mayan Deco geometries in a series of strange seals.

To the restrained palette we added a shot of verdigris plucked from the distinct roof tiles.

Tempering the restrained elegance of the main mark, we added some potent doses of high desert surrealism.

The shape of the in-room menu was inspired by the archways and deco geometries in the building's rooftop portico.

In each guest's room, an unassuming bookmark holds a delicious secret.

The mysterious red monocle on the dresser is more than a curio—run it over the surface of the "bookmark" and find a Secret Menu hiding within.

We helped craft a robust online presence to complement the myriad delights of actually being in the space.

Digitizing the character of a historic landmark can be tricky. We raided the archives of news clipping and photographs for snapshots into the Plaza's glamorous mythology.

For Instagram icons, we reinterpreted the architecture's wealth of obscure symbology.

After 3+ years of painstaking renovation, un-tallyable sweat and setbacks, The Plaza opened its doors in the Spring of 2020. A giant achievement for all involved, and one of our proudest—and most challenging—undertakings to date.

Book a room at The Plaza next time you find yourself way out west.

Special thanks to Paul Foster for his vision and dedication, not only to the Plaza Hotel, but to revitalizing El Paso. Thanks to William Kell for shepherding this project to completion, and to Hersha Hospitality Management for their incredible execution.